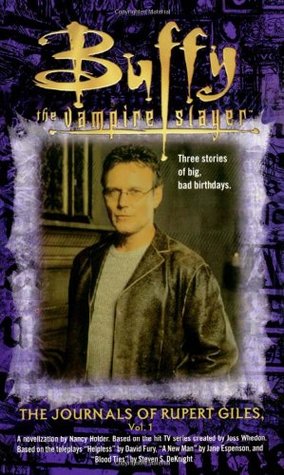 As I continue my march through the Buffy novelizations, I’m amazed they were still putting these out in season five of the show as the bulk of the episodes previously revisited were from season three and earlier. With Nancy Holder switching to Giles, she’s decided to focus on an event more than a specific character, with each installment being about Buffy’s birthdays (18, 19 and 20). The first two also happen to be Giles-centric episodes, which makes sense for the title/cover, but the third is very much a Dawn focused installment.

First up in this book is Helpless (Season 3, Episode 12) which is the one where Giles has to drug Buffy to remove her powers and then set up an encounter with a vampire per the age old tradition of the Cruciamentum. This was a good episode, that set up some interesting future storylines with Giles and the Watcher’s council, but on its own here it falls a little flatter without any of the surrounding context. Fans of this episode should instead check out the excellent short story collection, Tales of the Slayer Vol. 4 which focuses exclusively on other Cruciamentum’s throughout history.

Next up is A New Man (Season 4, Episode 12). In a fairly jarring change of scenery, Angel’s gone, the gang’s in college, Buffy’s discovered the Initiative, is dating Riley and Willow is having secret witchcraft sessions with her platonic friend Tara, Oz being nowhere to be found. As Giles feels left behind, he meets up with Ethan Rayne and ends up being turned into a demon with only Spike able to understand who he is. This was another fun episode, but the shift in time/place with very little explanation would make a tough book for those not already familiar with the series.

Finally it’s Blood Ties (Season 5, Episode 13, kudos to the creators for keeping Buffy’s birthday close to the same point in each season). By this point, Buffy’s not in college, she now has a sister, Buffy and Tara are an item, Anya is a regular, and Spike is in love with Buffy. The Dawn thing is handled/explained pretty well, as the point of the episode reveals everything, but the big bad Glory and her brother are very random and confusing as presented here. The episode is also confusing to put in a Giles centered book, as he has no bigger part than Willow, Xander or Joyce, and a much smaller part than Dawn.

The framing device used to bookend the story is Giles attempting to sacrifice a part of himself to a demon to keep Buffy safe, and he’s reliving the last three years of watching over her. It doesn’t make a lot of sense, and goes absolutely nowhere in a 3 page epilogue. I’d have preferred some some entries in his watcher’s diary which is already a part of the show.