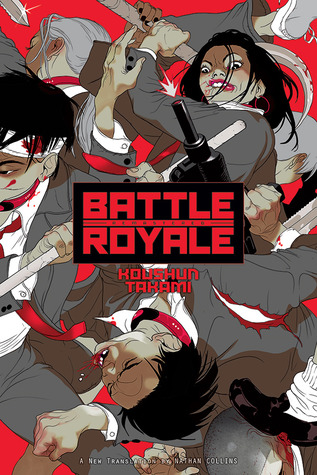 Reading this book for the first time in 2019, it was easy to spot the influences its had on subsequent books in the dystopian young adult genre. Interestingly enough, the afterward on the Viz edition of this book has Takami copping to basing his book on Stephen King’s The Long Walk, a book I really loved that was originally published under his pseudonym Richard Bachman. I guess any book that features teens killing each other for adult entertainment is bound to draw comparisons to the major works with that distinctive element.

The premise of Battle Royale is that a fictional Asian country which seemingly shares the most characteristics with Japan has a fairly regular event where a bus full of middle school kids are told they’re going on a field trip. Instead they’re knocked out with gas, and when they wake up they have collars around their necks that can track them, listen to them, or even blow their heads up. The purpose of the collars is to make them play a game where they each are given a weapon, and they all need to kill each other until there’s one person left standing.

To make the same interesting, there are zones which are off limits (your head will explode if you enter one) and the non-explosive zones are constantly shrinking to cause people to run into each other. Also, if more than 24 hours go by without a kill, everybody’s head gets blown off. The game is also not particularly fair, as each student is given a random bag with a different “weapon” in it. Some kids get guns, others get knives. One kid gets a fork. There’re other oddities like body armor, tracking devices, and more creative ways for killing people. Also, because it’s entirely not fair, one girl is shot in the leg before it begins. Also, one of the competitors has a major reason for being more likely to win/thrive than others.

The main characters in the book are:
– Shuya – The main point of view character, though it does shift throughout the book. He’s a little bland in that he sees the good in everybody, but at least he loves American Rock and Roll music.
– Noriko – The girl shot in the leg at the beginning. I found her pretty bland and reactionary.
– Kawada – The guy with the biggest secret in the game. He was a great character to keep the plot advancing and keep readers guessing his true intentions.
– Kiriyama – The bully and psychopath at the school who kills without remorse.
– Mitsuko – She reminded me a bit of the evil school girl from Kill Bill.
– Shinji – The smartest, most athletic and resourceful kid in school. Nobody can kill him, there’s still a chance as long as he’s alive. He sounds lame but ended up being my favorite character.

With 42 (!) students in the game, I was worried I’d have trouble keeping track of them, particularly with many of the characters being known by first names and others my last names, and some used interchangeably (Shinji Mimura one that comes to mind). Takami does a nice job of making the characters who will stick around memorable while also making the redshirts interesting as well. My favorites were the sneaky guy whose goal was to just follow the likely winner and the attractive girl who proves more than a match for the creepy student trying to take advantage of the circumstances.

There were a few things that kept me from loving this book, though I did really like it. I’m not sure if it’s an issue with the translation or just the style of the writer, but whenever the students talked about having crushes the writing always dropped to melodrama. (Think 1940’s style cinema, falling in love instantly and tragically.) The second was the ending. I actually really liked where the ending went, but there were a few moments I found really hard to believe involving the final survivors and how what they do in the final pages. I caught the movie a few years back, and while I thought it was fine I’m anxious to revisit it with the novel really fleshing out some of the main characters listed above.