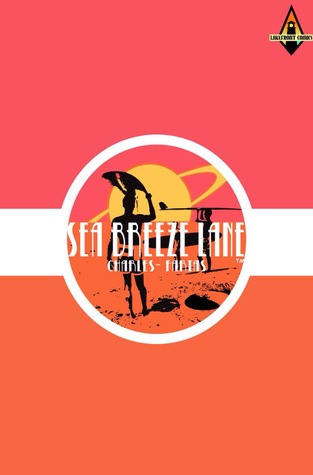 We picked this one up awhile back after liking what we saw of it on Kickstarter.com despite not knowing much about it. It’s been four years since the book was published, so I have to admit it sat on our shelves for awhile before I picked it up. Was it worth the wait?

While I enjoyed this book, the story was a bit tough to follow. What I made of it was that Sea Breeze Lane is set in the future, where much of mankind has relocated to a terraformed type Jupiter. There’s secrets as to how man kind was able to begin a new life in the stars, and some of it stems around two scientists that invented the mechanism for beginning a new planet to live on. The secret to launching the device is hidden inside a the scientists son who end up on the run from some sinister figures.

Part of my problem in following the book was that since I wasn’t familiar with any of the characters coming into it, when the setting and characters would change from page to page without any narrative device I wasn’t sure who was working for who. The art by Salomon Farias was good at distinguishing between faces and storyboards, but whenever the characters wore masks I had a tougher time following the characters. My only other issue was the lettering in the first issue that was set directly over the art was a bit tough to read, although it got better throughout the book.

I was interested enough in the story to read this all in one setting, and was glad I stuck through the bonus materials at the end as there’s some additional resolution in the form of an epilogue after the supplements (perhaps this was part 5 of 5, as the rest of the book seemed to end on chapter 4 of 5). The book also sets up sequels for those who are interested.