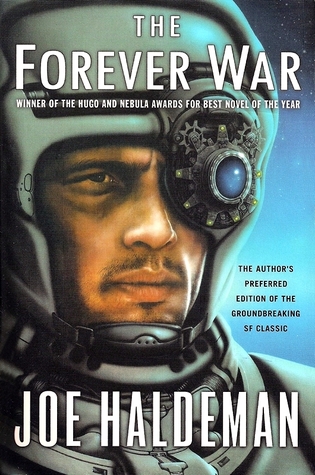 I expected I would like The Forever War and also that it would follow a certain format based on the title of the book. I was half right. I really enjoyed the book but it was not what I expected. My guess going into this was that it would be a much more combat driven book, and it would be a lengthy book following multiple characters in a sprawling space epic. When I picked it up from my bookshelf, I was surprised to see a 260 not particularly dense pages story. While the story does go to multiple locations over hundreds of years, it’s an introspective story following one soldier with only a few instances of battles entering the story. Even the introduction of the book built up the author’s time in the Vietnam War and the immense war aspect of this book, but the sci-fi elements of this book are much more developed than the war ones.

The story begins in the far off future of 1997. Man has begun an interstellar war against the little understood Tauran alien race. In order to best combat the alien race, a draft has been instituted selecting the very finest candidates in terms of physical health and intelligence. Being selected for the war is essentially a death sentence for multiple reasons. First, the rate of survival in the war against the Taurans is not particularly high. However, even if one is to survive the battles, in order to travel from planet to planet (and different star systems) each soldier travels at near light speed causing an Einstein relativity outcome of decades (or longer) passing on Earth while only a few months pass for the traveling soldiers.

Each time the soldiers travel for battle, the world they can possibly return to changes immensely. As with most speculative science fiction, it’s not always for the better either. In addition to loved ones dying, the whole world becomes difficult to return to for somebody not accustomed to the changes in their absence. The particular future envisioned by Haldeman is certainly colored by the societal views of the 1970’s. Hippie communes are at points the solution to urban sprawl, and Haldeman’s theory on homosexuality in the future straddles a line between ultra-woke and gay panic.

Through the whole store, the main character William Mandella narrates in first person beginning at his being drafted and continuing through the duration of the war over a thousand years later. There’s not much of a supporting cast with the exception of Marygay, the woman William is in love with who is also serving in the war. The rest of the cast frequently changes as Mandella changes planets and centuries. Mandella is a reluctant soldier, one who is drafted in and wanting to serve his time and get out. As the world continues to change without him, he progresses through the war and provides the reader with updates for the state of the war and the state of mankind all viewed the prism of a (near) present day man.

This was a quick read that effectively told a story of survival in war conditions, but the real thrill of this book was the frequent time jumps and adjust Haldeman ends up creating a story where advancements like lasers, drones, clones, neutron bombs, stasis fields, matrix style skill implants, and plenty of other big ideas all fit right in and don’t need a ton of development. Although there aren’t a ton of great characters, Mandella was someone I could relate to and enough of an anchor to keep me invested throughout the book. Despite there being other books in the series, this also felt entirely like a stand alone book, something I appreciated after reading other Hugo/Nebula award winners like Ringworld or To Your Scattered Bodies Go, books I really enjoyed but felt like beginnings of stories.