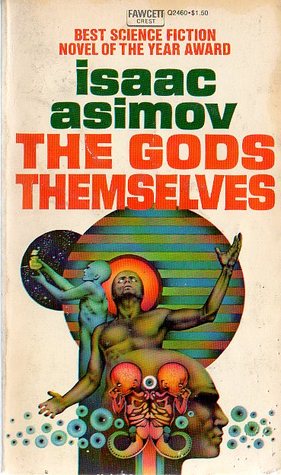 I had never heard of this book before starting my Hugo/Nebula challenge, but I was looking forward to it as I enjoy Isaac Asimov and the dual Hugo/Nebula award winners tend to be some of the iconic works in the genre. Thankfully this did not disappoint as Asimov brought a combination of hard sci-fi, alien world building and high concept craziness to deliver a very entertaining read. The book is told over three separate sections, each one very different from the others but all filling in story in a nearly linear narrative. While the third section was the longest and least interesting of the three, the hook had been set enough that I tore through this one and enjoyed the entire ride.

Book one begins with a miraculous discovery. A tungsten compound has been replaced by a plutonium compound, the likes of which should not be possible in our universe. While the substance begins to break down, it provides enough clean power to suggest that if harnessed it could enable free power for all of Earth if the process is repeated. The scientist who discovers this has lucked into it as much as anything as the process has been completed by beings from a parallel universe. Why have they done it? Who are they? What’s in it for them? Are there any risks?

Book two answers those questions, by flipping over to the parallel universe and following along three characters who become involved with this process. Asimov creates a new universe where entities fall into rational, emotional or parentals beings, in addition to hard or soft ones. It took me awhile to acclimate myself to what was going on, because Asimov jumps into the story and fills in the relationships as he goes. I ended up loving both this section and book one, as the characters he introduced were compelling and motivated by selfish interests that dovetailed with questions of universal importance.

Book three takes the setting to the moon, with a colony of people pushing the boundaries of science possibility. A minor character from book one is the protagonist, picking up where many of the questions from book one left off. This section definitely reads the most dated, both in terms of gender roles and Asimov’s version of the future. (Much of this is excusable as sci-fi adventure, but I was pretty surprised by most characters nonchalance when dealing with the possibility of the Earth not having a moon.) I was predicting a more high stakes ending than the pragmatic one delivered by Asimov, but the entire story stayed true to the actions of a few having immense impact on the whole.

After a slow start, the awards winners have been a roll with exciting books recently, Ringworld, To Your Scattered Bodies Go, A Time of Changes and now The Gods Themselves all being very memorable and interesting reads. The next two years include fellow dual winners Rendezvous with Rama and The Dispossessed, the latter of which will hopefully redeem The Hainish Cycle which has unfortunately been a forgettable series so far.