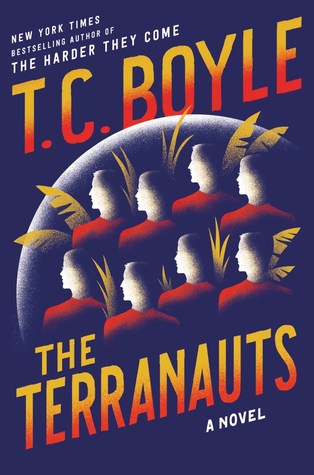 The Terranauts was the final book I received from by Brilliant Books Book of the Month Club membership. This was a story taking place in the early 1990’s where 8 people have volunteered to be confined in a biodome for two years as part of an experiment, four men and four women. The book follows three people: Dawn, a woman inside the dome, Ramsay, a man inside the dome, and Linda, a woman who missed the cut and must watch from outside in hopes of getting in two years later. The story starts out as the eight finalists are selected for entering the Ecosphere (E2 as the Terranauts call it), and primarily takes place during those two years, with a few pages dedicated to the transition after the two year period.

In addition to the three main characters, there are a few supporting characters that help populate the book. Inside the dome are characters likes Gyro (the nerdy guy obsessed with Dawn), Gretchen (the awkward woman attracted to Ramsay, Richard (the doctor who has to deal with the repercussions of other Terranauts situations), and Stevie (the attractive but shallow marine biologist). Outside the dome there’s Johnny (Dawn’s boyfriend at the time she enters the biodome), Jeremiah (aka God the Creator, the man who invented E2), Judy (or Judith a woman who is romantically involved with both Ramsay and G2).

The people inside the dome are celebrities in this book because of their groundbreaking experiment, and the repercussions of all of their decisions on the other Terranauts and the mission overall amplify the importance of all their actions. The 1990’s setting didn’t add a lot to the book except for some fun pop culture references throughout. I imagine it was set in a pre-internet/cell phone era in order to amp up the isolation of the Terranauts as well as how groundbreaking an experiment like this is.

I enjoyed the characters in this book, as Dawn and Ramsay reminded me of the actors Isla Fisher and Jake Johnson and I had fun picturing them as I read the story. Linda reminded me of Charlene Yi, and provided at times a jealous antagonist and at others a sympathetic protagonist. This felt like a book I should love, and although I really did enjoy it I also think the author foreshadowed a momentous and violent ending but ended up telling a much more grounded story. On it’s own that’d be fine, but with each point of view character telling the story from the future the ending felt out of line with what had been set up earlier. That complaint aside though this was an enjoyable book that I’m glad I read.

Overall I’d rate the 6 books I received from the Book of the month club (it was a bi-monthly membership) as follows:

1. The Risen by David Anthony Durham
2. The Terranauts by T.C. Boyle
3. Underground Airlines by Ben H. Winters
4. The Fortress at the End of Time by J.M. McDermott
5. Age of Assasins by R.J. Barker
6. I’m Thinking of Ending Things by Iain Reid